Mongolia is the furthest frontier where you can enjoy a long journey surrounded by stunning nature. Follow us in a two-weeks exciting marathon, to discover the Country of the last nomadic people.  Over 2000 km riding the legendary Mustang, the ideal iron horse for these lands. And you will not be bothered by the costs and complications of delivery of your own motorbike!
Make your choice between the wild North, rich in forests and lakes, and the South, crossing the legendary Gobi desert.

The name Mongolia has always evoked exotic images: the untamed leader Genghis Khan, camel caravans crossing the Gobi desert, wild horses galloping in the Steppe…
Still today, Mongolia looks like a fantastic place: as soon as you set foot outside Ulaanbaatar you get the impression to have moved into another century.

Mongolia Motorbike Marathon offers you the experience of a two-week marathon to discover the treasures guarded by the last nomadic people, at a most suitable pace that will also let you savour and enjoy this unforgettable experience. The departure and arrival point for both itineraries is the capital city Ulaanbaatar: from here we will move NORTH, to discover a landscape of lakes and “Siberian” forests, or SOUTH, up to the Chinese borders, crossing the mystical Gobi Desert and up through the Orkhon valley.  Both itineraries are made of very short legs at the beginning, in order to let you familiarize with the environment.

After the first 2 days, the legs will be of about 200 km daily average, which is a thoroughly appropriate mileage for the kind of route. Shorter legs have been planned in correspondence of places of interest, in order to give you the time to better appreciate the places and sites we will visit!

Meals (breakfast lunch and dinner) during the journey (the two meals in Ulaanbaatar are excluded) are all included in the participation quote. We will have breakfast and dinner in tourist camps when travelling across the Steppe, and at restaurants, when we will stop into towns and villages. During the journey, a packet lunch will always be provided at midday.

Drinks
Drinks are not included in the price, and the participants should provide for their payment from time to time. However, water will always be provided by the organization. 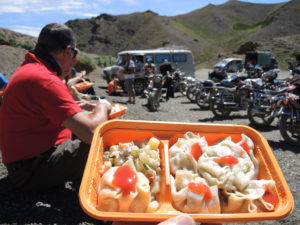 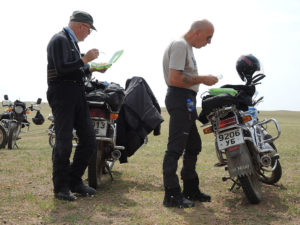 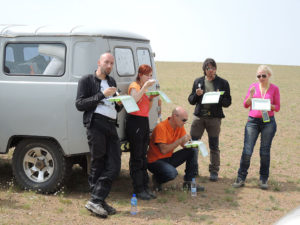 Motorcycle clothing
We recommend a summer motorcycle clothing, that is consisting of jacket, trousers, boots, gloves and helmets. An enduro clothing is not required. We suggest you bring warm clothes to put on when needed, especially in case of rain.

Non-motorcyclist clothing and clothing for the night
We recommend a clothing suitable for the season and for the specific latitudes, given that temperatures could reach a minimum of 15 degrees during the night and a maximum of 35 degrees during the day. Temperature range will be greater the more we get closer to the Gobi Desert. We recommend you bring a raincoat or an umbrella, given the rather wet season for Mongolia.

Due to the non-renewal of the bilateral convention between Italy and Mongolia, since early 2016 a Visa requirement has been reintroduced.

Cold and winds are the masters of Mongolia seven months a year. Temperatures drop up to 40 degrees below zero in the capital and to 60 degrees below zero in the taiga. The most devastating effects come out with the phenomenon of the zuud: the ice penetrates the soil, preventing the herds to graze. Every year counts millions of dead among cattle and sheep, which are the main source of livelihood for the Mongolian economy. But the freezing temperature also causes hundreds of victims among men as well. Weather conditions prevent travelling for several month and make the assistance to the affected populations difficult. From June to August you can enjoy a very pleasant summer, with a dry and healthy climate and temperatures up to 25-30 degrees above zero. Even in this short season, winds are the protagonists: the cool wind from the north, and the warm one from the Gobi Desert. You’ll get used to the tiny and sudden tornadoes of dust. June and August are also the rainiest months: it is frequent to experience cloudbursts on the Steppe, whose tracks often become real marshlands, difficult to ride.

You can find 220 V power in the gers or in tourist camps, where European power outlets are available.

The ger is a mobile dwelling used by many nomadic peoples in Asia, such as Mongolians, Kazakhs and Uzbeks. In central Asia it is also called Yurta, from the ancient Turkish name adopted by the Russians.

Although in the second half of the XX century Mongolia experienced an intense urbanization, more than half of the Mongolian population still live in their traditional dwellings, whether they live in the country or in towns and villages.

Twenty square meters containing a universe, cultural heritage faithful in centuries as well as a great example of advanced technique.

This is the ger, the most typical Mongolian dwelling since thousands of centuries, at least since 3000 BC, according to anthropologists. Look at it from afar, in the Steppe: White, lunar, of a circular shape. Simple, democratic, functional. A real masterpiece of Nordic design. Long before Alvar Aalto and Ikea.

Since ancient times, gers are made of a wooden structure and of a cover of sheep wool felt carpets; they can be different sizes, according to the specific culture of the people using them. The main advantage of this kind of dwelling, is that it can be dismantled, moved and assembled once again in short times: perfect, for a nomadic lifestyle.

A home, a nest, a shelter, a hearth that can be assembled and disassembled, as it were made of legos. Almost a child’s play. The assembly and disassembly process is carried out with specific acts consecrated by tradition: everyone has its role, and the binding ties among the family are reinforced. The circular structure is made of willow wood. It forms the wall of the ger and acts as a base for the support poles which are tied together at the top of the tent in a cap from which the funnel of the internal fireplace comes out.

A light and strong structure which is supported on the inside by two wooden columns in a T shape, which are often richly inlaid: because simple and efficient do not necessarily mean poor and ugly. On the contrary! On the outside, the ger is embellished by felt carpets and waterproof leather, which make it cold-resistant and give it an aristocratic look. The nomadic house covered with stoles.

The door opens south, eager to welcome the warm air coming from the Gobi Desert. Outside the ger is bitter cold and intense storm, but inside is a whole other story. The ger leads you from one world into another: that is why you shall always be careful not to stumble or step on the jamb, while you cross the threshold. Misfortune and dark presences might take the opportunity to open a gap to get inside. Inside the ger you will discover a whole world: scents, colours, ancient rites, new fetishes.

At the centre is the cast-iron stove, which acts both as fireplace and kitchen. On the sides are the beds (men and guests on the left, women and the marital bed on the right), chests, stools and table, a little altar, the household, a jug with basin to wash and saddles.

The smell is a one of a male haute-couture fragrance: leather, fumée tobacco, felt, with a discreet after-taste of alcohol (vodka, to be precise). Colours tend to orange, in a tint akin to gold colour scheme, which is sign of regality and prosperity. On the ground thick felt carpets are laid. You will breathe the essence of the country everywhere: it is made of symbols of a glorious past and of admissions of a globalised modernity. Faded Polaroids, chines radios, toys, coloured plastic buckets, decoders connected to absurd satellite dishes or control units regulating the energy flow coming from modern solar panels. However, the etiquette has not been affected at all: it is always even stricter and more detailed than the standards at the court of the Sun King.

The ger is in fact also a universe of rituals, which give the pace to the order of the world. Once inside, men sit on the left, while women on the right. Inauspicious objects are banned, and their list is rather long: from cutting weapons such as knives, to pots without lid, to digging tools reminding grievous moments such as burying rituals. The collocation of the furniture itself indicates complicated rules tied to the religious symbolism. The well-mannered guest avoids asking too many questions and never leans on the support poles (this is a most inauspicious action, such as stumbling while entering the ger) and represses any desire of whistling. (That would be the most effective way to ask for bad luck to come over the ger and its inhabitants).

A specific etiquette is also required when saying goodbye: hosts shall make a turn around the stove clockwise. And don’t forget to mind the step while going out of the ger. Don’t stumble over it. Thanks to its technical features and to the care put into protecting it from bad luck, the ger has endured throughout the centuries. And is determined to continue its story.

Tourist unit very similar to a camping site, as far as the organization is concerned. It consists of 20-50 gers where hosts can find shelter for the night. These camps are identical in structure and appearance to the tents used by the local populations for a dwelling. However, there are only 2 very comfortable single beds (ore one double) inside, as well as two tables, a simple coat rack and a wood stove which is lit by the staff in case of need. The tourist camp has a large common room made of concrete, which acts as breakfast room and restaurant, and which hosts common bathrooms and showers with hot water (according to the camp’s capacity). 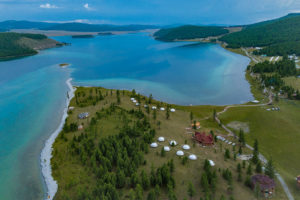 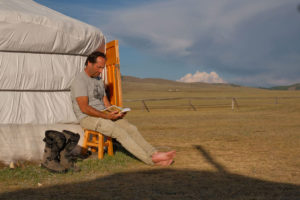 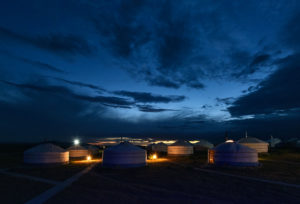